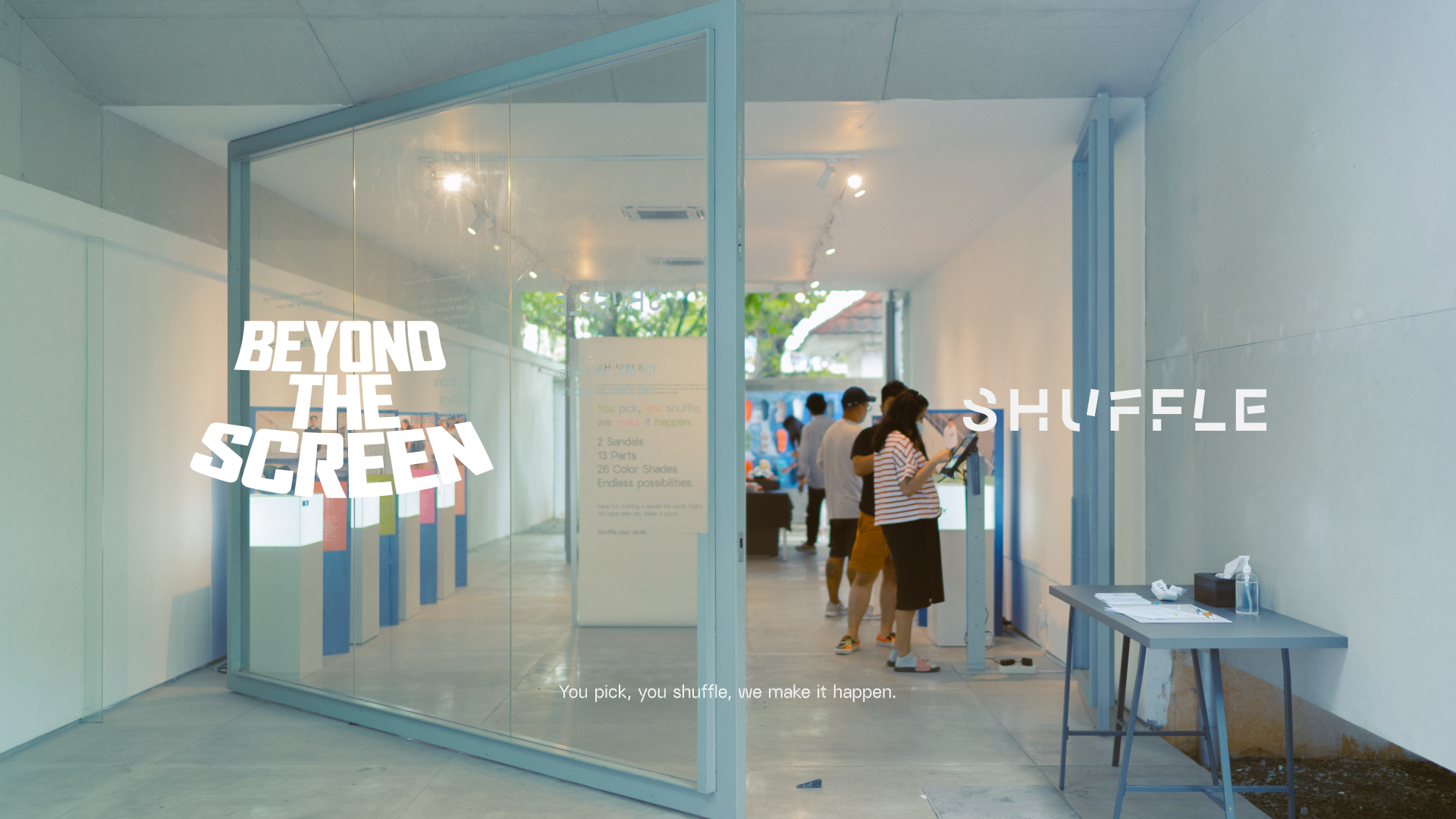 Shuffle has just launched. As part of the campaign, we set up a three-day exhibition in Jakarta to introduce the customization service to the general public. Taking place at Kala di Kalijaga, the exhibition showcased eight sandals ‘shuffled’ by illustrious creatives from different fields—among the names are Hadi Ismanto of Manual Jakarta, Thinking*Room’s Eric Widjaja, and motion graphics artist Isha Hening. The exhibition also includes an intimate workshop on sandal-crafting, where participants learned to make their own Shuffle with the guidance of Dash A Lab—our R&D team. Here’s a recap of the event. 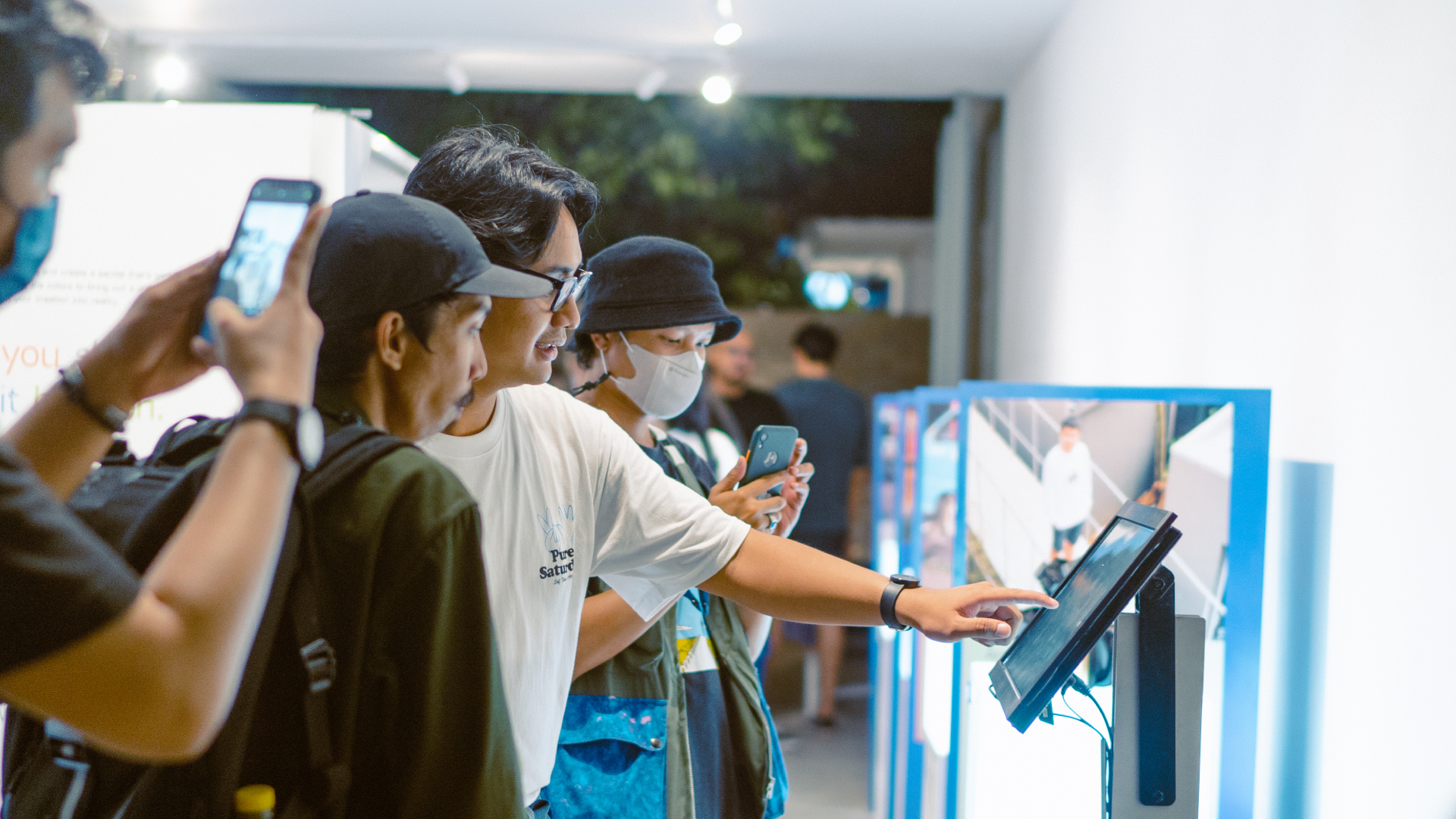 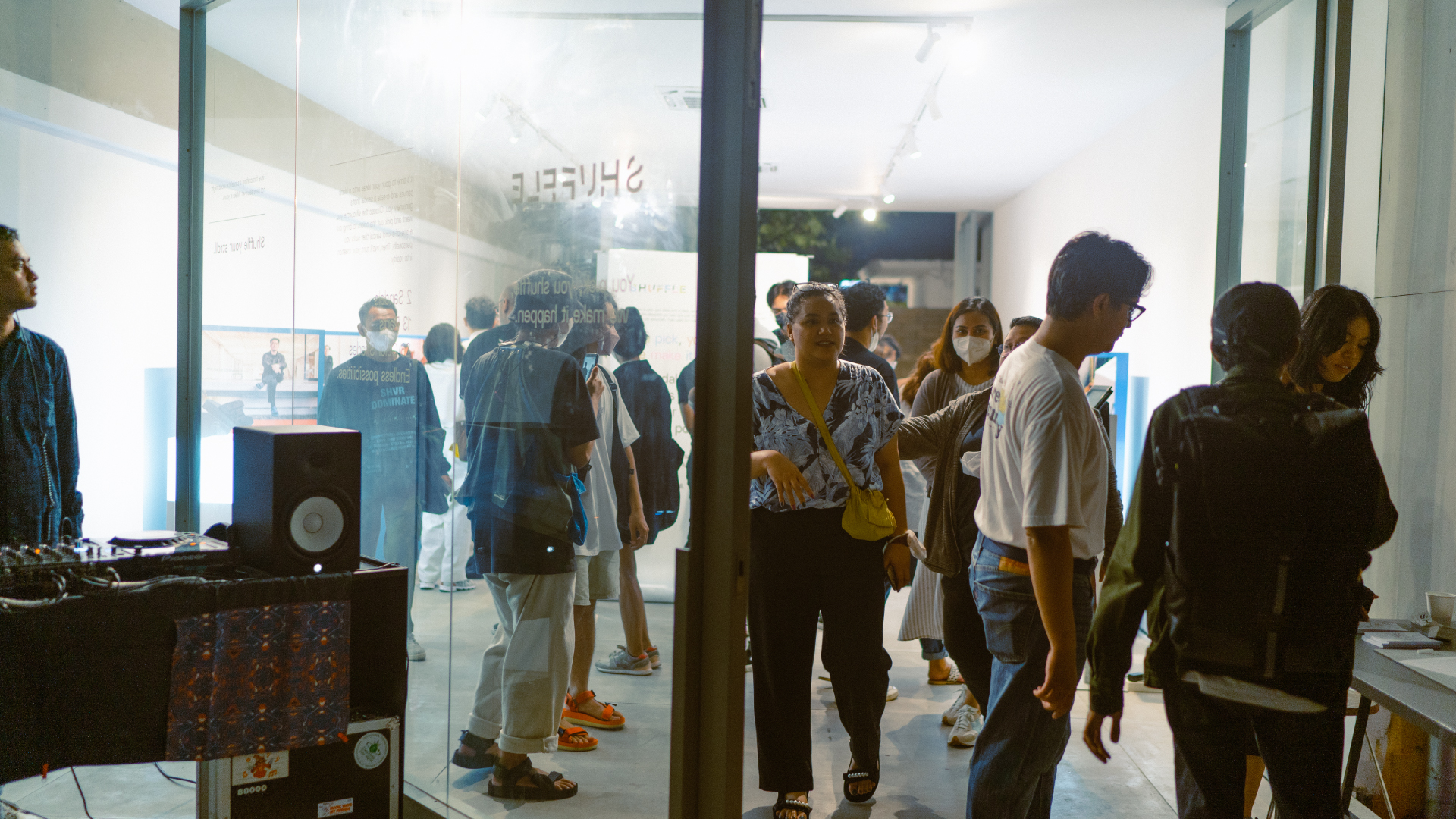 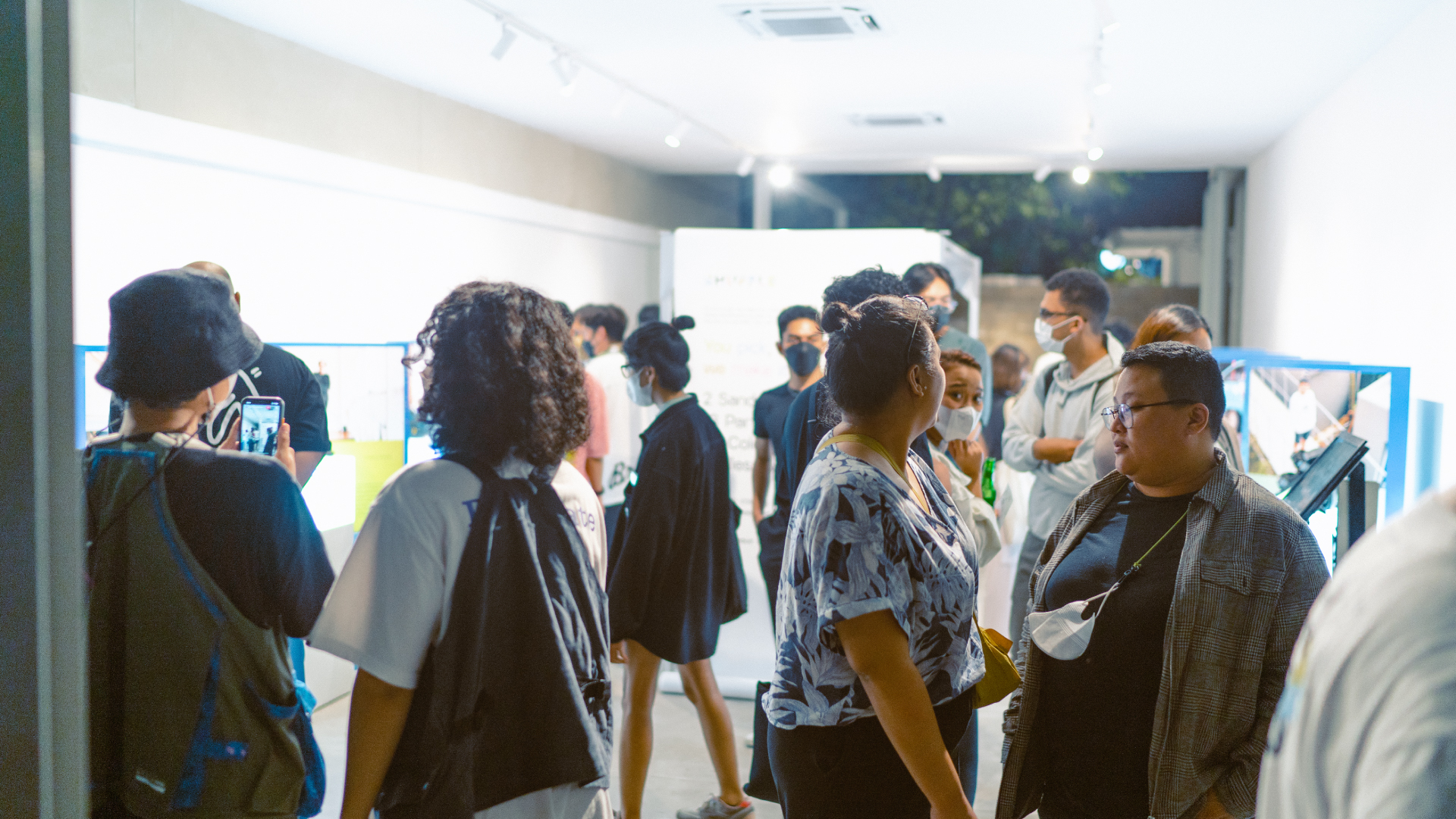 The rain had been pouring down on the city all day, and it only turned into a drizzle when the event was about to start. One by one, people began to show up. When a considerable flock had gathered, creative director Tomy Herseta stepped up to open the exhibition. “It’s our most complex project so far,” he remarked, “We’re not launching a product this time, but a feature. Behind its simple facade was a meticulous process that called for the integration of different divisions within the company—it needed tremendous effort from every single team.” When the speech ended, the ceiling-to-floor pivot door was pushed open, allowing the gathered mass to enter the space.

Eight sandals made by Shuffle collaborators were on display. They reflected a wide range of tastes, from Kelly Vallerie’s elegantly muted Shuffle to Ariel William Orah’s psychedelic pair.

The somber mood of the day was lifted as people mingled around—the space made alive with chatter and laughter. Adding to the lively atmosphere was Baldi Calvianca’s masterful mix of acid house tracks, filling in the air with a lovely ambience.

New visitors kept coming, and while some headed directly to the sandals, some opened their phones to play with postcards given at the entrance. They featured a vibrant AR effect made by our creative team.

The night went swimmingly, and people lingered around the venue even after closing time to talk with friends and acquaintances. “This is our first exhibition after the pandemic started, and witnessing an overflowing appreciation for Shuffle made me realize that the team’s hard work paid off. That makes me happy,” co-founder Fahmi Faisal later added. 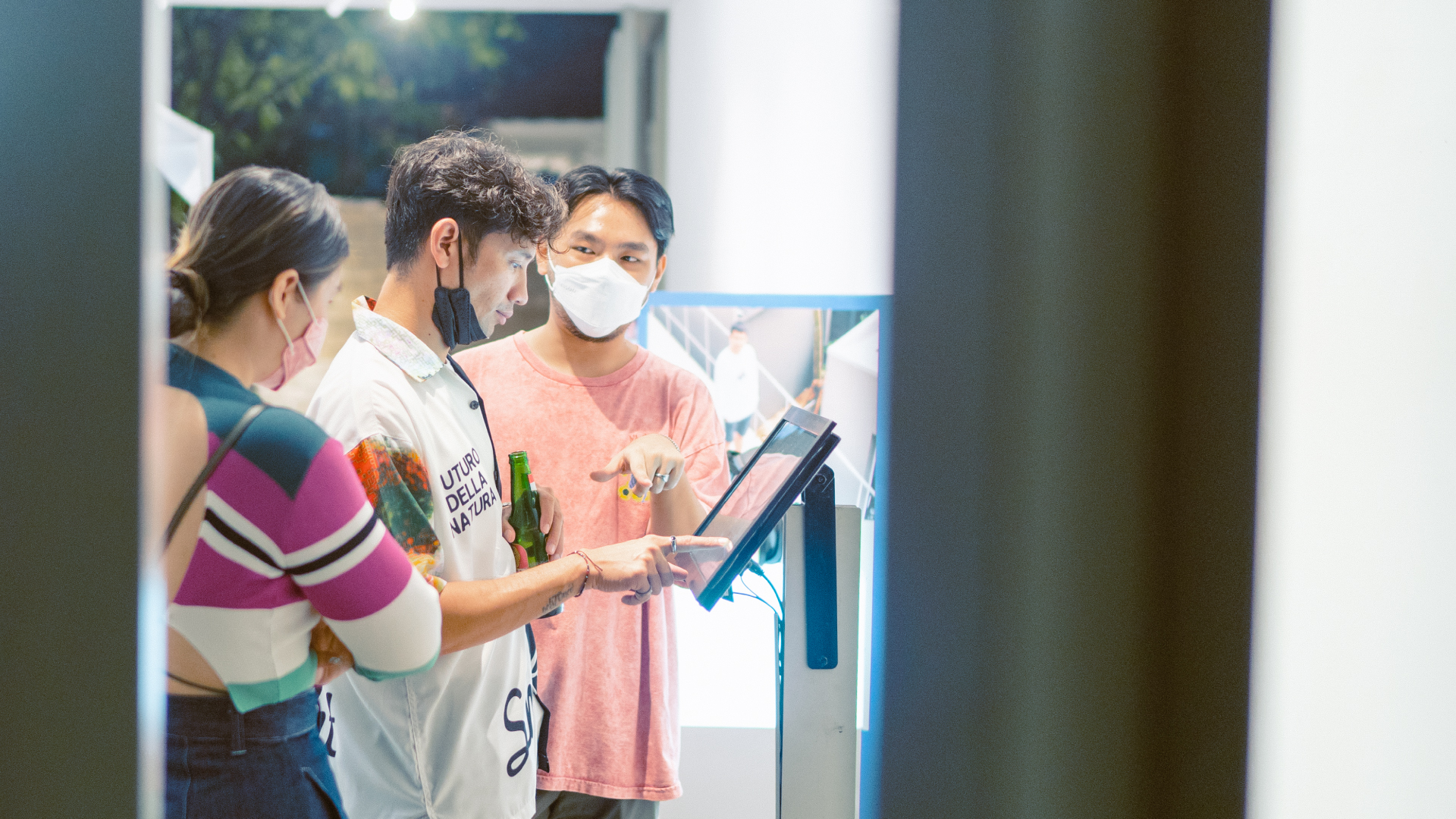 It’s the second day. The venue was open to the public from noon, but the real highlight of the day started mid-afternoon. It was time for the hands-on Shuffle workshop. The workshop’s participants were people selected from a pool of Shuffle submissions, along with some media partners. When it was time to start, our creative director gave a little tour guide to introduce the collaborators. “We didn’t choose our collaborators based on the number of followers they have on social media, but rather what they do and the spirit they bring to their work,” said Tomy.

The participants were then guided to the big table at the back of the room, where the workshop would take place. All the materials were already laid down on the table, and when everybody had found their seat, the workshop started. Guided by Dash A Lab, the participants were introduced to the world of R&D and learned to mark and cut patterns to create sandal parts and assemble them. On the crafty aspect of the workshop, one participant jokingly commented that this is “a test to see who actually passed kindergarten without cheating.”

After everyone finished their prototype, each presented their Shuffle and the inspiration behind it. When it was time to part, a pair of Swift socks was given as a little gift—something to take home while our team turned the prototype into actual sandals.

“I hope that through this workshop, people would understand that R&D is not as simple as copying a finished product. There’s a lot of thinking and communication involved, and a huge investment of time and money. It’s pretty complex.” said the head of R&D Irvando Dityawan. 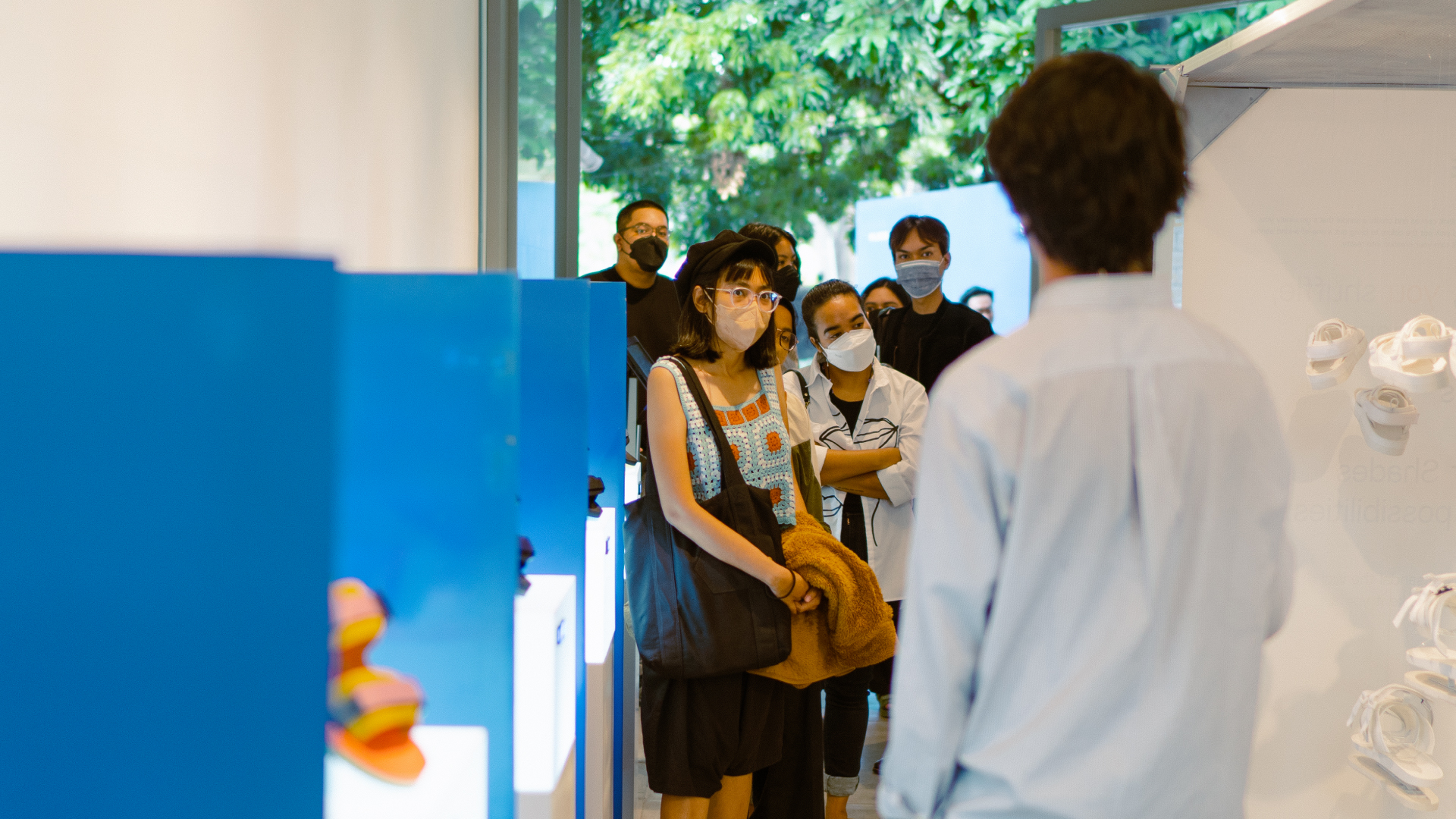 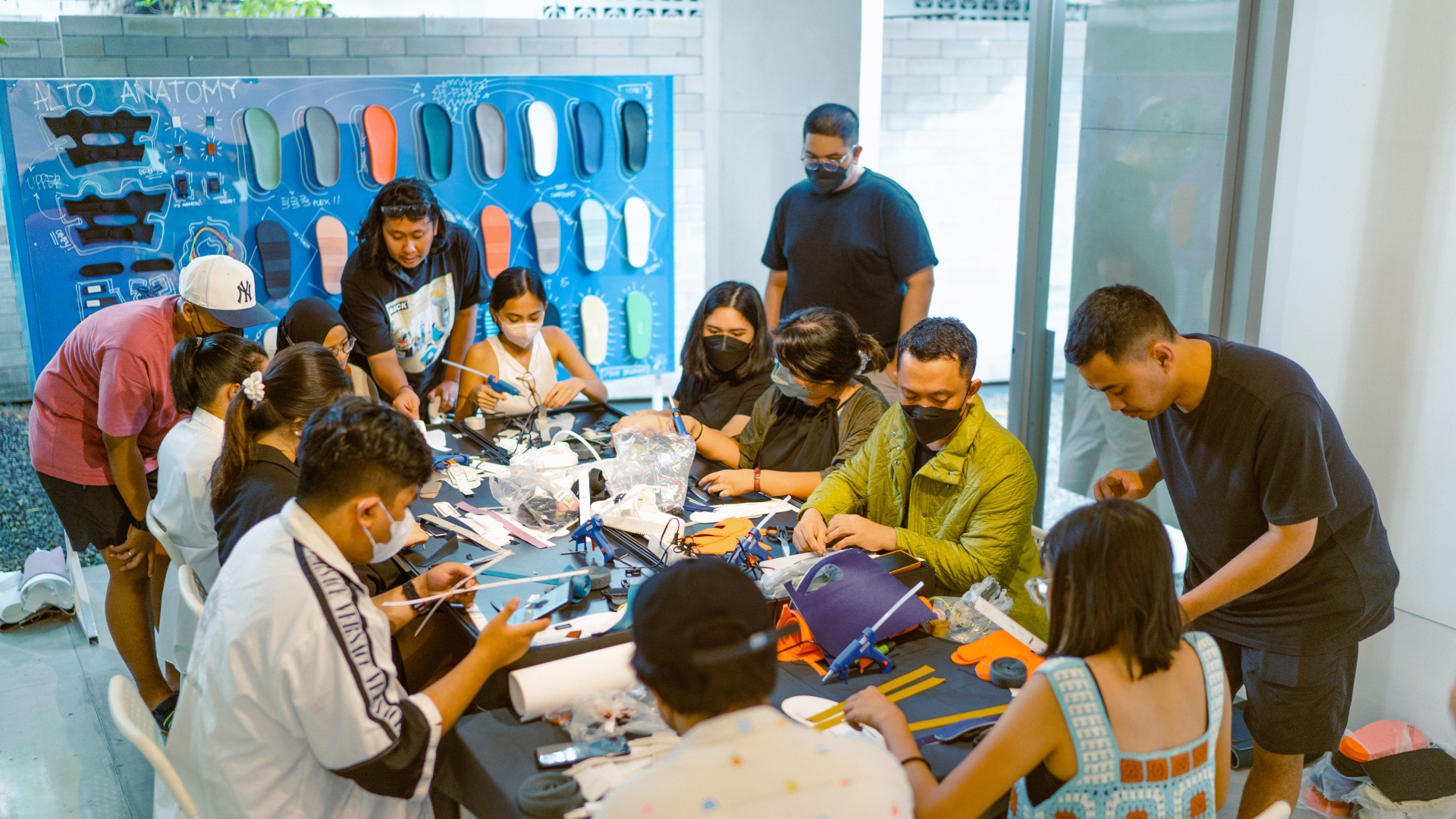 It was the last day, but the excitement wasn’t over yet. A number of guests and curious passersby came to look around the venue, admiring Shuffle made by Argi Tendo, Etza Meisyara, Natasha Tontey, and the rest of our collaborators. Here are a few photos from the last day of the exhibition.

That was a recap of the exhibition. Huge thanks to our collaborators, everyone who came to visit, and everyone else who made it happen. We hope to see you at the next one!

Isha Hening is a visual artist specializing in motion graphics with an extensive and colorful portfolio. As one of the pioneers in Indonesia's motion graphics landscape, Isha has worked with A-listers the likes of Raisa and Iwan Fals, and international artists like DJ Snake and Steve Aoki. Her vibrant, psychedelic works have also painted many big events in the past, such as the 2018 Asian Games, We The Fest, and Djakarta Warehouse Project. With new technologies coming up almost constantly, Isha isn't one to stay in her comfort zone. For example, she just collaborated with Mercedes Benz on an NFT collection. This grit, combined with her insistence on following her creative instinct, makes her one of Indonesia's most prized contemporary artists. 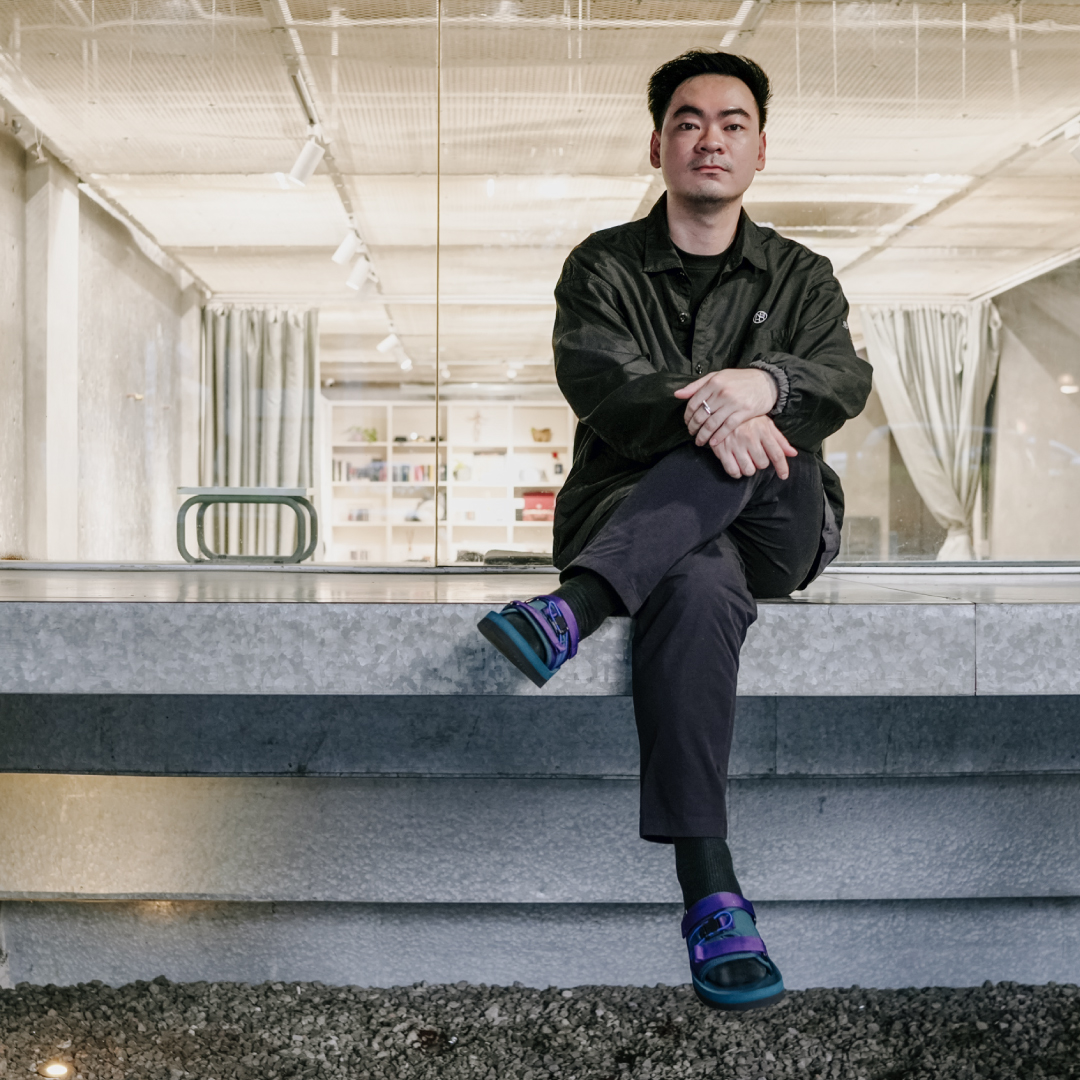 Hadi Ismanto is the founder and CEO of New Media Folder, the parent company of the online lifestyle magazine Manual Jakarta. His journey in journalism started while he was a student at The University of Melbourne, working as a journalist for local magazines. Upon his return to Jakarta, the lack of quality publications on Jakarta's latest happenings enticed him to start Manual Jakarta. Under his leadership, the publication quickly grew to become the go-to lifestyle media for the discerning public through its carefully curated content and sharp writing. Now with his other current endeavors (ZOU, MALT Studio, etc.), Hadi is determined to constantly raise the bar for media in Indonesia.

Born in 1991 in Bandung, Indonesia, Etza Meisyara is interested in art's potential to express humanist values. Her foray into visual art was through the Intermedia Art Studio programme at the Bandung Institute of Technology (ITB), where she graduated with a Masters in Art in 2016. Etza continues to infuse her childhood passion in music through projects that combine sound art, installation and performance. She has participated in group presentations such as ARTJOG MMXIX 'Arts in Common' (Yogyakarta, Indonesia), 'AURORA' (Liverpool, England, 2018) and the 2016 KLANG KUNST Sound Art Festival (Braunschweig, Germany). In 2017, Etza was a recipient of the fifth Bandung Contemporary Art Award (BaCaa), a biannual art prize presented by ArtSociates and Lawangwangi Art Space. 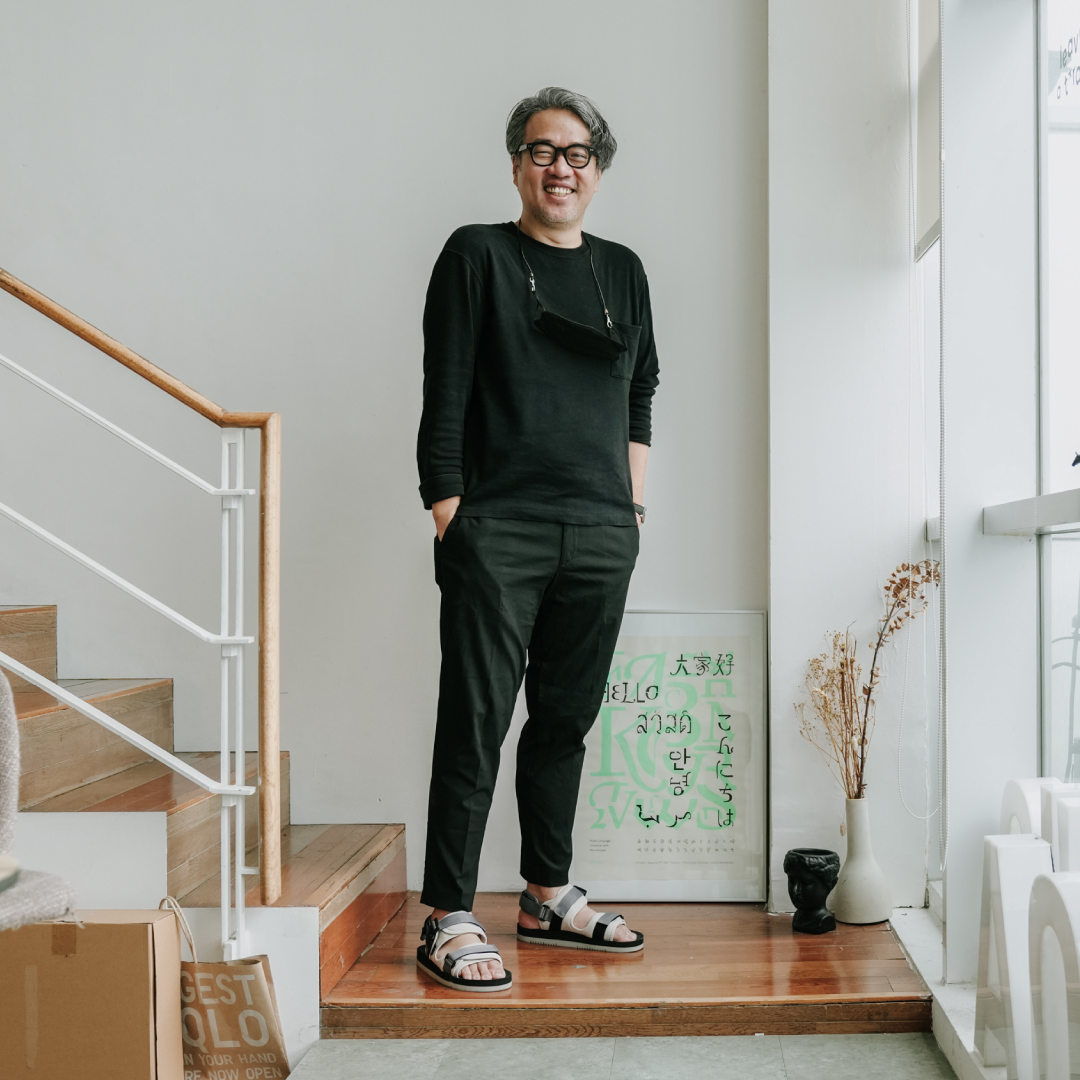 Eric Widjaja is the creative director of Thinking*Room, a Jakarta-based branding and design company he founded in 2005. After starting his career as a graphic designer in San Fransisco, Eric decided to fly home and founded Thinking*Room a few years later. Now, thanks to his tenacity and warm, unifying leadership, the design studio is one of the most well-established in the industry. Among some of their clients are Indonesia's unicorn startups Tokopedia and Bukalapak, Bank Indonesia, property giant Agung Sedayu Group, and the concept store The Goods Dept. As a practicing craftsman in emotion-driven design, Eric believes in creating designs that resonate with people and helping brands find their authentic voice. 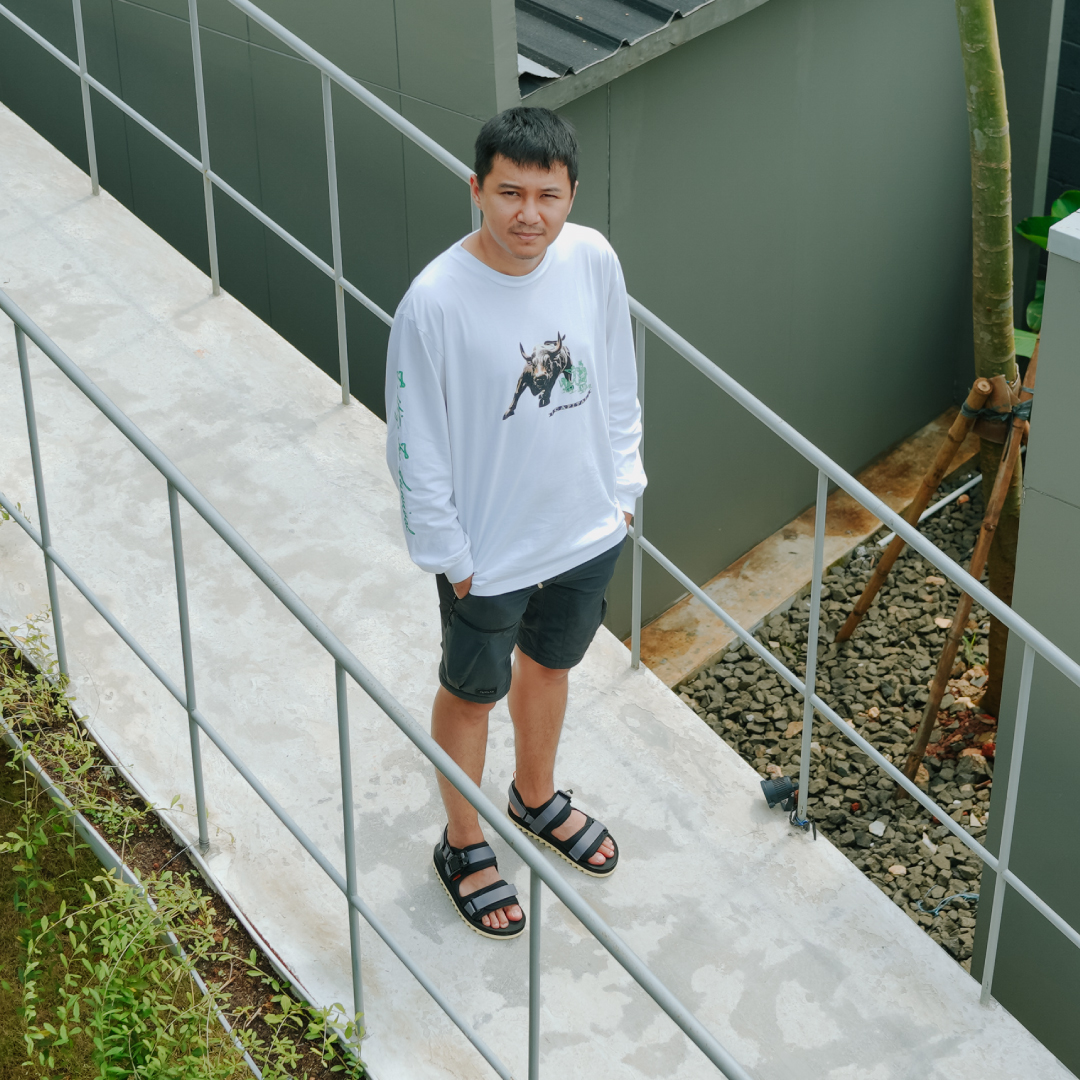 Argi Tendo is a multi-talented artist and engineer behind Tendos Studio, a creative agency combining art and technology. Among their clients are several big Indonesian companies like Gojek, Traveloka, Indomie, and Kopi Kenangan. His creative exploration of AR technology made him the first person in Indonesia who had access to tinker with Instagram camera filters. He also engages with the general public on the platform with his eccentric yet entertaining endeavors: from breaking the infamous Google Chrome's Dinosaur Game to making modular music with french fries. Unafraid to dive headfirst into unfamiliar territories, Argi Tendo pushes the boundaries of how technology can be used creatively to create a unique digital experience. 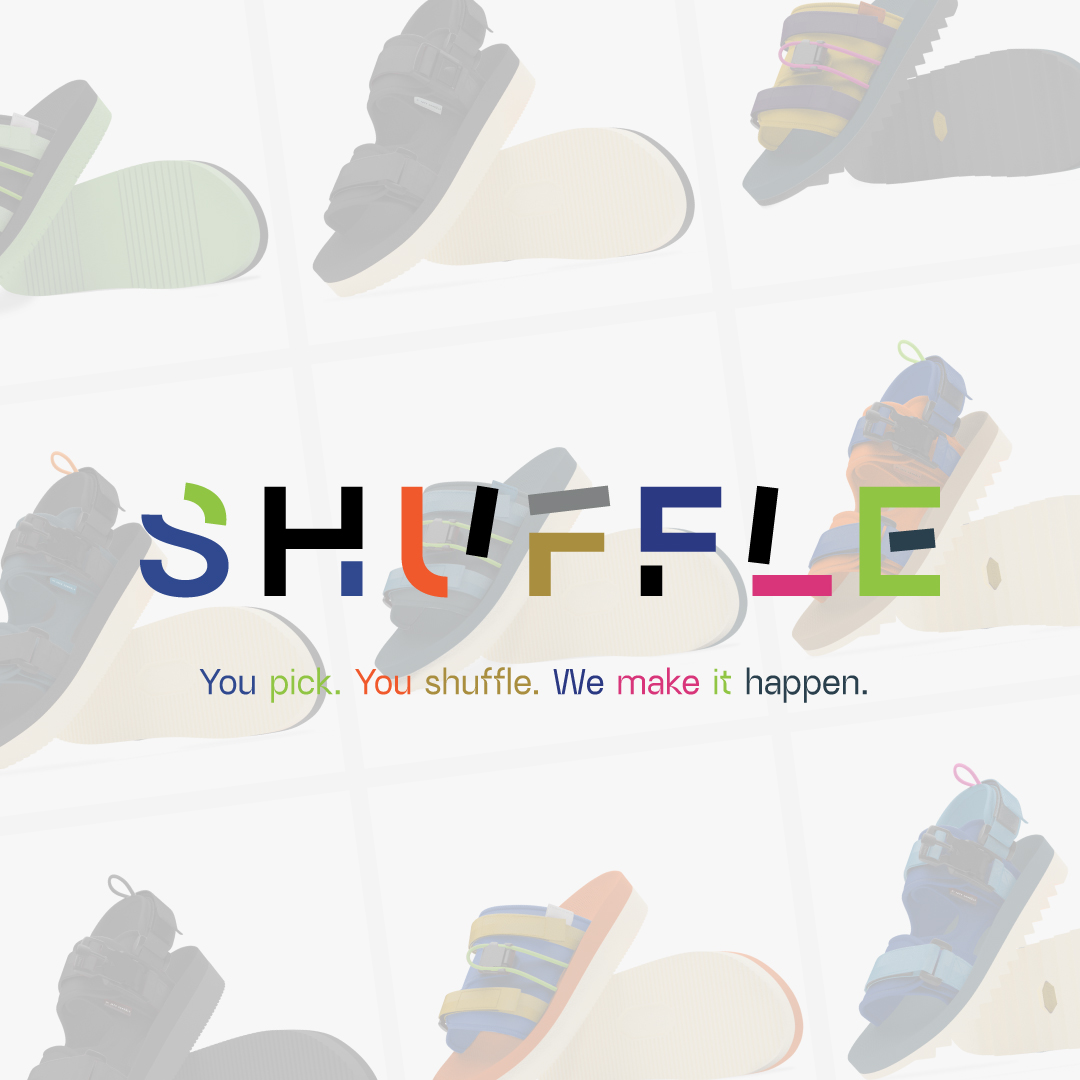 It's now your turn to create a sandal that truly represents yourself.